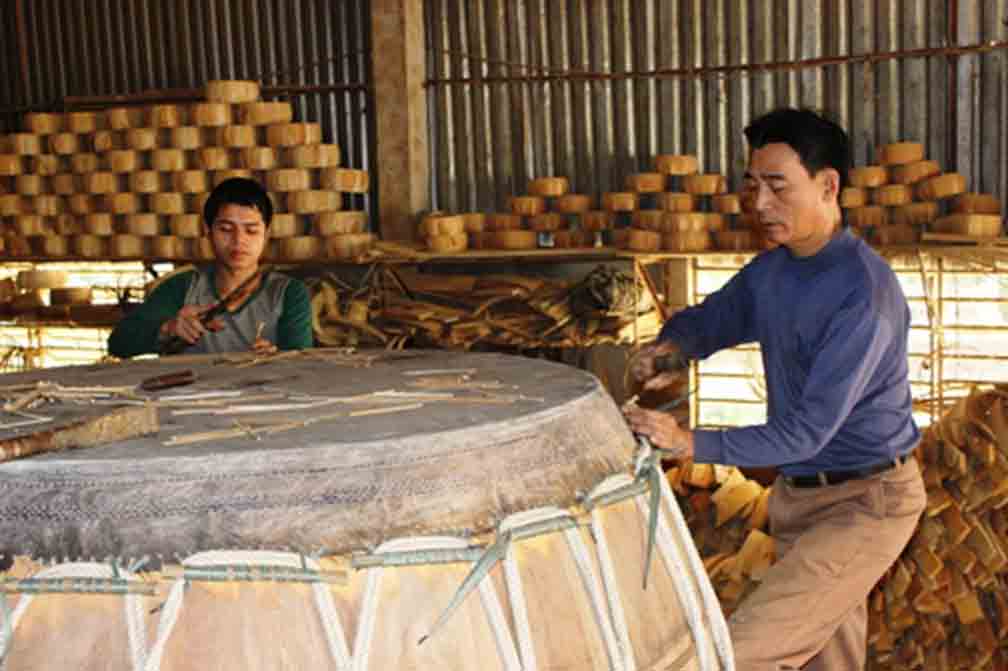 Doi Tam village is very famous for its drum-making techniques. The village is located at the foot of Doi Mountain in Doi Son commune, Duy Tien district, the northern province of Ha Nam. Doi Tam has 545 families and around 550 villagers are drum makers.

This craft village is located at the foot of Doi Mountain in Doi Son Commune, Duy Tien District. Drum making in Doi Tam is said to have a 1,000 year old history. Legend has it that the founder of this craft was Mr. Nguyen Duc Nang. In the 10th century, he, together with his brother, chose this place to settle and handed down the drum-making craft to their villages. After Nguyen Duc Nang died, the villagers buried him at the foot of the mountain and honored him “Trang Sam” (Master of Thunder) in his memory. On the occasions of the Vietnamese Lunar New Year, and traditional festivals. Doi Tam residents com to visit the founder’s grave and burn incense to pay homage to him.

Drums of Doi Tam Village have been well-known throughout the country. These drums look simple but produce very beautiful sounds that seem to express of the makers. Visiting the village, you will have opportunities to study the secret of this craft. According to custom, drum-making techniques are transferred to sons and their wives, not daughters and their husbands. Any family that breaches the rules is expelled and cursed and booted from the drum-making occupation.

A drum is made in three major stages: leather tanning, drum-barrel making and drumhead stretching. Doi Tam craftsmen use buffalo skin to make drum heads. They shave buffalo leather till it becomes very thin and dry it in the sun. The drum-barrel is made of dried jackfruit timber. Stretching a drumhead is the most difficult task because it requires craftsmen’s skills to assess the sound.

Depending on the occasion, drumbeats can either create an atmosphere of joyful union or sad separation. Traditionally, drums would be heard at festivals and weddings. They would also be used to announce arrivals to the community, as well as when a school opened, or closed, or during art or musical performances.

In Viet Nam, there’s a line used for slothful freeloaders: “As soon as he hears the cheo drumbeats, he visits the village’s communal house for a performance, and, after a heavy meal, he sleeps”.

When a flood, fire or death had occurred in a village, the drum would be used as call to arms or to announce a period of mourning. During the US war, the sound of the drum roused soldiers into action in the countryside. It also served as mark of respect for a cheo or ca tru performance. During a performance a connoisseur would knock the drum stick on the side of the drum at appropriate moments to show his appreciation.

Home to the pottery families (~14km)

The craft of jewelry-making in Chau Khe (~21km)