The poetic hats of Vietnam 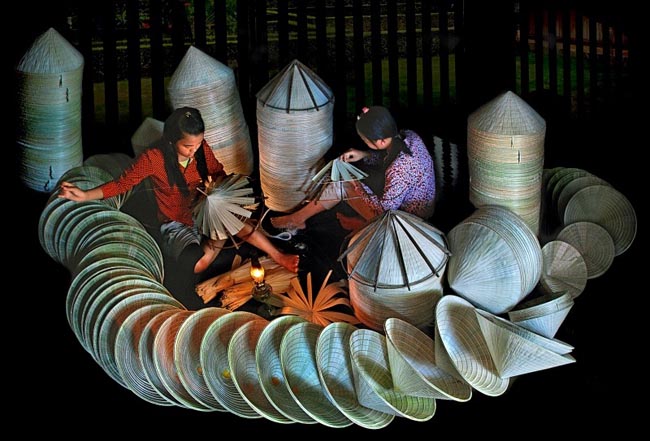 Women in Tay Ho village at the age of 10 learn to make conical hats by themselves and some people spend their whole life to make this traditional craft. To men, apart from farming, they help women iron leaves or cut bamboo to make frames. A kind of bamboo, they sophisticatedly polished bamboo strands into 16 strands; then bend them into round rings. To get beautiful leaves, craftsmen often choose leaves remaining light blue, iron leaves many times until flat and smooth. After that leaves will be attached to the frame. This stage is called “cham,” which is usually made by young girls. Hue’s conical hats are famous thanks to this stage.

Hue’s conical hats always have two layers of leaves. Craftsmen must be very skillful to make the two layers very thin. After this stage, the hats will be covered by oil and dried under the sun.

Moreover, to make the hat more beautiful, craftsmen also add paintings of Huong river and Ngu mountain next to verses. Over quite long time, the poetic hat is the exclusive products of Tay Ho village.

The craft of jewelry-making in Chau Khe (~220km)

Home to the pottery families (~242km)