The craft of jewelry-making in Chau Khe 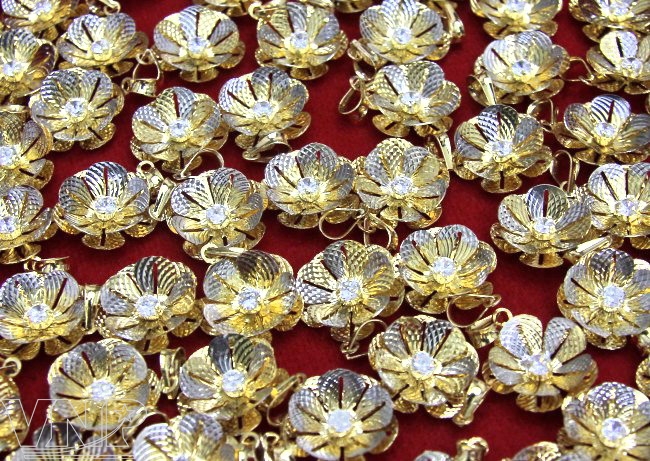 Chau Khe Village in Thuc Khang Commune, Binh Giang District, Hai Duong Province is known nationwide for its craft of jewelry making. Thanks to this traditional craft the village is changing for the better with every passing day.

Talking about the history of Chau Khe jewellery-making, Nguyen Duy Thich, a veteran artisan in the village said that in the 15th century, King Le Thanh Tong (1460-1497) ordered Minister of Interior Luu Xuan Tin to open a foundry to cast silver ingots for the court. Receiving the king’s order he went to Chau Khe Village – his native village, to recruit some villagers and took them to the capital city of Thang Long to cast coins. Over time, the foundry also made gold and silver items and soon became the most well-known address for jewelry making in the capital. Since then, Chau Khe villagers have considered Minister of Interior Luu Xuan Tin the ancestor of jewelry-making of their village. According to the village elders, in the past, Chau Khe villagers mainly grew rice and made jewelry in their leisure time to earn money. Over the past ten years, jewelry-making in the village has developed strongly thanks to the State’s new policy on encouraging people to develop traditional crafts.

Now, 99% of the households in Chau Khe Village engage in making jewelry. There are nearly 1,000 goldsmiths, of whom two-thirds have excellent skills and are able to access advanced technology from around the world. The village has established a co-operative and three jewelry associations in Hai Duong, Hanoi and Hai Phong. Over 100 potential households in Chau Khe Village have established their companies, processing workshops and shops to trade gold and silver in many cities and provinces throughout the country.

In Hanoi, there are about 60 gold and silver workshops and shops owned by Chau Khe villagers. Typical is the case of Pham Thi Binh, Director of Tu Binh Jewellery Private Enterprise on Phuc Tan Street, Hoan Kiem District in Hanoi. With the experience of the traditional craft her parents taught her when she was a little girl, together with her ability to update quickly and continuously knowledge from countries with developing jewellery craft, such as Italy and France, Binh has gained prestige for her business with many gold jewellery products of delicate designs, meeting the increasing demand of the market.

Chau Khe jewelry products are diverse in type, design, and materials such as silver, gold and copper alloy, pure gold, white gold, gems, and diamonds. They are always attractive to customers due to a fine combination between traditional craft and modern technology.

Hoang Dinh Duong, Head of Chau Khe Jewellery and Fine Arts Cooperative said that for Chau Khe workers, whether they produce and process jewelry and open a shop in their home village or other places, they always have a sense of preserving their ancestors’ traditional craft. They are always strict with themselves and keep their customers’ trust. Their virtue of “honesty, sensitivity, subtleness, carefulness, neatness, perseverance, talent and courteousness” has become their own identity in their business culture and production. Thanks to this, Chau Khe gold and silver products have been sold in most jewelry shops in the country and have started reaching out to the world.

According to Bui Van Cuong, Chairman of Thuc Khang Commune People’s Committee, developing traditional crafts is the plan and strength of the locality. Income from traditional crafts accounts for two-thirds of the commune’s GDP. Two villages in the commune have been recognized as craft villages. Chau Khe Village alone has 19 artisans who have been awarded the title of national artisan by the State. This village is a tourist destination for many domestic and foreign visitors.

Every year, on January 19 of the lunar calendar, Chau Khe Village jubilantly organizes a festival and a worshipping ceremony for the ancestor of jewelry making. This is an opportunity for the villagers to look back at their roots and show gratitude to the craft’s ancestor. It is also a chance for Chau Khe jewelers to exchange and popularize their traditional craft to further develop the local gold and silver trade.

Home to the pottery families (~27km)